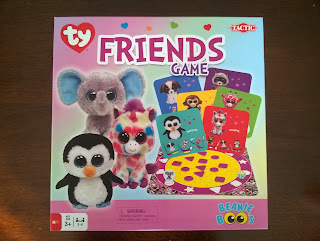 Personal History:
My daughter is nearly three now, and for at least a year she has been fixated with TY's line of giant-eyed stuffed animals called "Beenie Boos" which are helpfully stacked near the checkouts of almost every major retailer. We have a few of them because it can't be helped, but we have prevented the purchase of many, many more.

So this Christmas my daughter received this, the "TY Friends Game". Admittedly it was a good pick for my daughter since she was immediately attracted to the theme. And I had to say, nearly any board game she wants to play I'll play with her. Far be it from me to say "no" to a gaming session. 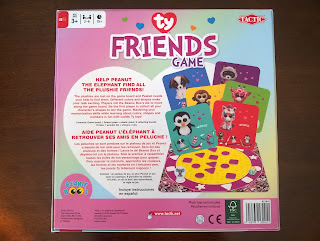 Condition:
The game was new when we received it, however a couple of months in the hands of my daughter has had its toll. The biggest issue is that one of the game board's four panels has been ripped off at the seam, a victim of my daughter's improper clean-up-time folding. It still lays fine with the other three panels though, so no biggie. One of the die's stickers is also coming off already and will probably need to be glued on soon. 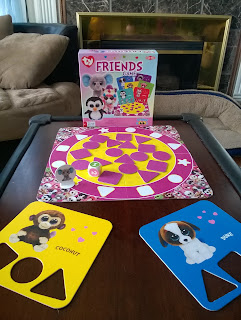 Gameplay:
Each player chooses one of the six player cards and places it in front of her. The "Peanut the Elephant" pawn is placed on the yellow star on the game board. 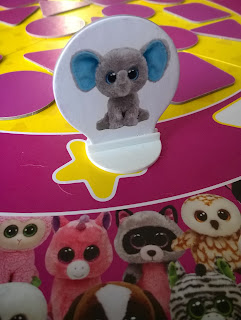 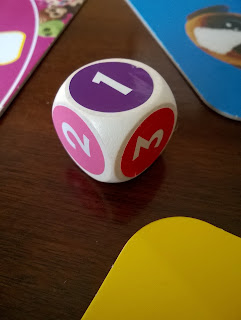 The player selects one of the face-down pieces from the board's center. If it matches the color of her player card she places it in the space of that shape in her card. If the piece does not match her color she shows it to the other players and returns it to the board in the same space from which she took it. Either way, the next player then takes her turn. 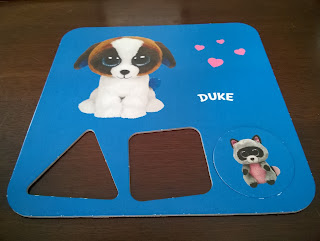 Play continues until one player finds and collects all three of her matching shapes and places them in her player card. The first player who does so is the winner.

So How Is It?:
This is essentially a game of "Memory", but with a little bit of a board-gamey twist. Besides just keeping track of which pieces were searched like in a regular Memory game, players also have to practice rolling to move, a skill which is essentially to many early game and which my daughter has helped me to understand is NOT as obvious as one might expect. 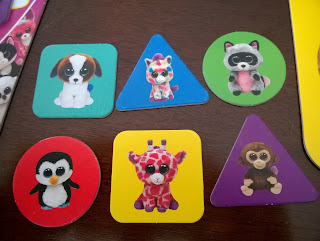 I'll also add that, while technically you're only supposed to move around the board in one direction, allowing the player to choose which direction to move actually adds a very light amount of strategy which the game would otherwise be entirely lacking. 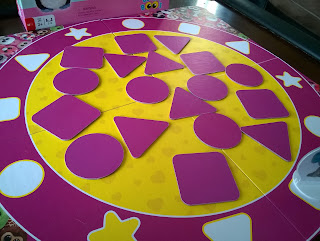 My daughter, who again is not quite three, likes this game a lot. I've no doubt that the pictures on it help, but it's also full of manageable tasks that she can easily so, as well as real decisions she has to make which effect the game. As much as it's dull for ME to play, it's about perfect for her now, and hits all the right marks for a toddler game. All that said, there's not really anything going on here that you couldn't also find in plenty of similar games beside the TY license, so it's hard for me to get all that enthusiastic about it. 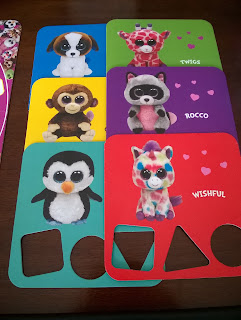 Final Verdict:
A good game for beginner gamers, offering just the right amount of basic strategy and memory skills while also introducing common game concepts like rolling for movement, taking turns, and competitive play. It scores an "Average" 3/5, probably leaning closer to "Good" if you ask my two year old